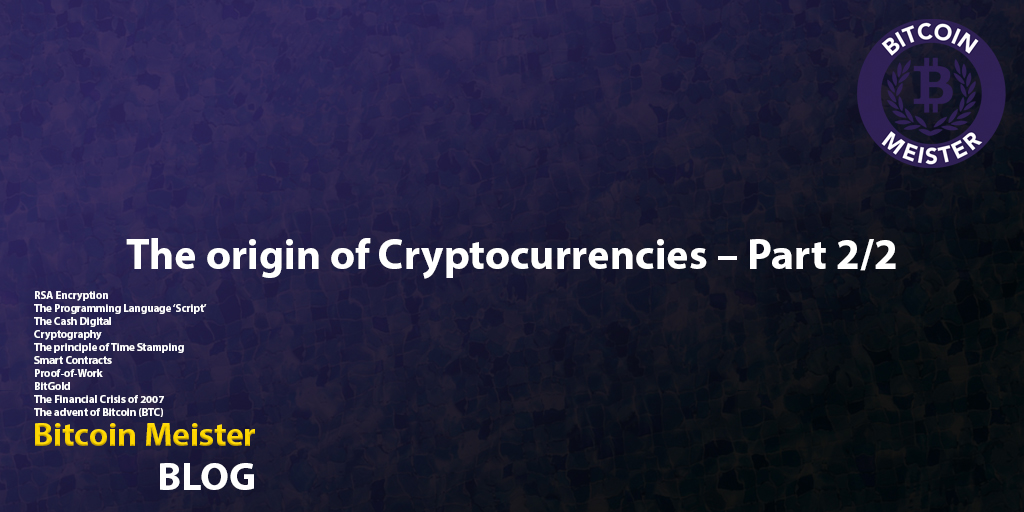 In 1992 Scott Vanstone proposed an algorithm for Signatures and Encryption operations much faster than RSA Encryption (created by Rivest, Shamir & Adleman).

The idea of ‘Proof-of-Work‘ is described in a paper entitled “Pricing via Processing or Combatting Junk Mail“, written by Cynthia Dwork & Moni Naor, which will be presented at Crypto’92 – 12th Annual International Conference on Cryptology, in the USA (Santa Barbara – California).

CyberCash then proposed a micropayment system, inspired by NetBill (a set of protocols and software for trading goods, information and other services, with very low transaction costs), with the ‘CyberCoin‘.

The company went bankrupt in March 2001, due to Y2K bug, CyberCash had released an update to the Y2K compliant software, but many users had not installed it, resulting in double expense records for credit card payments through the system.

Nick Szabo, an American computer scientist, introduced the ‘Smart Contract‘ in 1994, which makes it possible to set up transactions between two parties who do not know each other, in which all information is shared.

Smart Contracts will be computer protocols (no legal value) that facilitate, verify and enforce negotiations or the implementation of transactions.

In 1996 in Davos (Switzerland), on February 8th, John Perry Barlow (one of the founders of Electronic Frontier Foundation) wrote a document where he supports the idea that no Government, or other forms of power can appropriate the Internet (technology thought in the 1960s at MIT (USA), the ARPANET was born in 1969, which then became popular in the 1990s) with the “Declaration of Independence of Cyberspace“.

The E-Gold appeared in 1996, it’s a ‘Digital Private Currency‘ whose value is indexed to the price of Gold. The founders are Dr Douglas Jackson (Oncologist) & Barry Downey (Lawyer).

In the lines of the Financial Times published on July 13, 1999, we could read in the Chronicle “On the Web” by T. Jackson:

The only electronic currency that has achieved critical mass on the Web.

That same year (1996) the NSA (National Security Agency) published on June 18 the report “How to make a Mint: the Cryptography of Anonymous Electronic Cash” – which will become the subject of many conspiracy theories …

Adam Back, British Cryptographer invented in 1997 the ‘Hashcash‘, a system of ‘Proof-of-Work’, to fight against Spam. A. Back was not aware of the past work of C. Dwork & M. Naor published in 1993 on ‘Proof-of-Work’.

On March 10, 2001, in a conversation between Hal Finney and Peter Todd (15 years old) about an article by Wei Dai, P. Todd raised the idea of a Signature system that would allow the creation of a ‘currency’ from ‘Hashcash’, but without finding a way to solve a major difficulty, which is ‘how to avoid double spending on a decentralized database’.

Personally I like the idea of hashcash if, and only if, it’s structured like a real currency as opposed to simply proof of work. In the real world you pay for resources used. In many cases this should also apply to P2P and other computer systems. Of course getting hashcash workable as a real currency is extremely difficult. I’ve thought of a scheme that would work (coins are signed by owner and can only be changed (signed to a different owner, by owner) except you need a decentralized « central » database of all the hashcash that’s been minted. Unworkable. !@#$ spend-twice problem.

Between 1998 and 2005 Nick Szabo, developed the BitGold Project, a decentralized Digital Currency, based on Forgery-proof Chains and Proof-of-Work, as well as: Timestamping, Digital Signature, Public Keys, etc… Elements that will be found with Bitcoin (BTC).

BitGold would have been an alternative currency that did not require a third party (Central Bank) to create or manage it.

As N. Szabo said “Our money currently depends on trusting a third party for its value“. The public was not yet ready (as was David Chaum’s DigiCash). But his system was still vulnerable to attacks.

The BitGold project will then serve as the architecture for Bitcoin.

On November 26, 1998, Wei Dai submitted the idea of a “Distributed Registry-based Digital Cash” to a mailing list for Cypherpunk members.

He publishes an essay detailing his idea of “B-Money” using a Proof-of-Work system that creates money by solving a mathematical problem.

In 1999, the American economist Milton Friedman, predicted the imminent creation of an e-cash (or something similar to Bitcoin), a reliable currency that would allow anonymous transactions on the Internet.

One of the most renowned and influential economists of the 20th century, Friedman’s ideas have radically changed the decisions made by policy makers.

Jeffrey Albert Tucker, an American economist, said at a conference on Bitcoin, “Friedman had a precognition for decentralized forms of money“. (Unfortunately Mr. Friedman died (2006) long before the birth of Bitcoin (BTC), so he did not have the opportunity to see his prediction come true).

Henri Massias, Xavier Serret-Avila and Jean-Jacques Quisquater described in May 1999 a “Secure Timestamping Service without a trusted third party“, which will also be mentioned in the Bitcoin White Paper. The design of this timestamping system was intended for the Belgian TIMESEC project.

In June 1999, Shawn Fanning invented the peer-to-peer technology → Peer-to-Peer (P2P), with Napster, an audio file-sharing platform, and which worked with a central server (Farm), a centralized repository of all files owned or requested by ‘Peers’ – Napster was shut down in 2001 by the FBI.

In 2001, Masashi Une talks about the “Chain of Time Stamp” in a publication entitled: “The Security Evaluation of Time Stamping Schemes: The Present Situation and Studies“, taking the development of what might look like the Blockchain (without online mining) even further

2004: Ryan Fugger conceptualizes the ‘Ripple’ for the first time, and develops a first prototype of the Currency as a decentralized monetary system → the RipplePay, a system implemented in 2005, to provide payment solutions within a global network.

RipplePay was entrusted to Jed McCaleb & Chris Larsen in 2012. They then founded OpenCoin, an American technology company, and from there RipplePay will be built on a protocol and payment solutions for Banks and Financial Institutions.

What makes Ripple different from any other Cryptocurrencies? Well, it’s that Ripple is a completely Original Creation! The idea was born long before Bitcoin and developed independently, only a few similarities can be found in Ripple (XRP) and Bitcoin (BTC).

The Financial Crisis of 2007, which shook the world’s financial institutions, was certainly the triggering event for the imminent development of a Digital/Cryptographic Currency, and thus the Birth of Cryptocurrency –Bitcoin (BTC)-. (Allowing to free oneself from the various financial problems encountered before and especially since this crisis: Forced levies, Hyperinflations …)

This crisis has left deep scars on the world’s middle and lower classes.

Several simultaneous events led to the sudden failure of the international financial system. The majority of the population lost confidence in institutions. So this is one of the most shocking examples: Cypriot savers had their savings confiscated. Bank of Cyprus account holders with more than 100,000€ were forced to lose almost 60% of their savings to avoid the bankruptcy of the island and to save the local banks that had accumulated mountains of debt. Of “the remaining 40% will continue to generate interest BUT it will only be paid when the bank recovers“.

2009 → January 3: Creation of the first Block for Bitcoin – The Genesis Block!

Then follows a long and exciting history of Cryptocurrencies!